As I sit here in one of my favorite writing spots, all is calm. The water is still, the sun is up & bright in my eyes, and the sounds of birds talking to each other is a pretty tune that surrounds me. After some much needed rain, the grassy hills are green again. It’s a delightful morning with a temp of 61 degrees.

Hard to believe in just a few short days the skies will be lit up with fireworks and we will be hearing the sounds of celebrations all around. Summer is on the move and the 4th of July is just around the corner. How will you celebrate this year? What will you see? What sounds will you hear? What flavors will please your taste buds as you celebrate and reflect on the gift of Independence Day? Let’s step back in time and chat a bit about the 4th of July and its beginning.

According to History.com, the Fourth of July—also known as Independence Day or July 4th—has been a federal holiday in the United States since 1941, but the tradition of Independence Day celebrations goes back to the 18th century and the American Revolution. On July 2nd, 1776, the Continental Congress voted in favor of independence, and two days later delegates from the 13 colonies adopted the Declaration of Independence, a historic document drafted by Thomas Jefferson. From 1776 to the present day, July 4th has been celebrated as the birth of American independence, with festivities ranging from fireworks, parades and concerts to more casual family gatherings and barbecues.

Interestingly enough John Adams would turn down any invitations for celebrations on July 4th in protest as he believed the correct date was July 2nd. Another interesting fact is that both John Adams and Thomas Jefferson died on July 4, 1826 which was the 50th anniversary of the adoption of the Declaration of Independence.

Celebrations weren’t a new thing for these folks. In the pre-revolutionary years colonists held annual celebrations of the king’s birthday. The sounds of ringing bells and speeches could be heard as part of the festivities. During the summer of 1776, some colonists celebrated the birth of independence by holding mock funerals for King George III as a way of symbolizing the end of the monarchy’s hold on America and the triumph of liberty.

Festivities including concerts, bonfires, parades and the firing of cannons and muskets usually accompanied the first public readings of the Declaration of Independence, beginning immediately after its adoption. Philadelphia held the first annual commemoration of independence on July 4, 1777, while Congress was still occupied with the ongoing war.

George Washington issued double rations of rum to all his soldiers to mark the anniversary of independence in 1778, and in 1781, several months before the key American victory at the Battle of Yorktown, Massachusetts became the first state to make July 4th an official state holiday.

After the Revolutionary War, Americans continued to commemorate Independence Day every year. One of the popular sounds of July 4th are the fireworks. This tradition began in Philadelphia on July 4, 1777, during the first organized celebration of Independence Day. Ship’s cannon fired a 13-gun salute in honor of the 13 colonies. The Pennsylvania Evening Post reported: “at night there was a grand exhibition of fireworks (which began and concluded with thirteen rockets) on the Commons, and the city was beautifully illuminated.” That same night, the Sons of Liberty set off fireworks over Boston Common.

The 4th of July has been a Federal holiday since 1870. Over time this date has been celebrated with leisure activities and family get-togethers to include fireworks and food. A common symbol of the day is the American Flag with the sounds of the U.S. National Anthem, “The Star Spangled Banner” being heard as well.

Are you a fireworks fan? Do you like the big spray of color? Maybe you prefer the flashes of light with sizzling sounds as they whiz through the sky. Possibly you are among those who love to hear the big BOOM?

I’m always amazed by the technology and engineering that takes place to entertain me for a short while. I love the large sprays of color and the sizzle of the firework as it dissipates. While the grand finale is just that, I prefer the slower pace of the show so I can enjoy each and every display that lights up the evening sky.

As Americans, fireworks seem as natural as apple pie and baseball. I did a bit of digging regarding the origin of fireworks and came across this information from the American Pyrotechnics Association. Did you know many historians believe that fireworks originally were developed in the second century B.C. in ancient Liuyang, China? It is believed that the first natural "firecrackers" were bamboo stalks that when thrown in a fire, would explode with a bang because of the overheating of the hollow air pockets in the bamboo. The Chinese believed these natural "firecrackers" would ward off evil spirits.

Sometime during the period 600-900 AD, legend has it that a Chinese alchemist mixed potassium nitrate, sulfur and charcoal to produce a black, flaky powder – the first “gunpowder”. This powder was poured into hollowed out bamboo sticks (and later stiff paper tubes) forming the first man made fireworks.

Fireworks made their way to Europe in the 13th century and by the 15th century they were widely used for religious festivals and public entertainment. The Italians were the first Europeans to manufacture fireworks and European rulers were especially fond of the use of fireworks to “enchant their subjects and illuminate their castles on important occasions.”

The tradition of incorporating fireworks into our celebrations continues today in the U.S.  Another tradition we observe is the enjoyment of good food. Picnics, campfires, time on the deck, or hiking the trails requires some great food and our Silver Creek Specialty Meats summer sausage and meat snacks are perfect options for all these events and more. 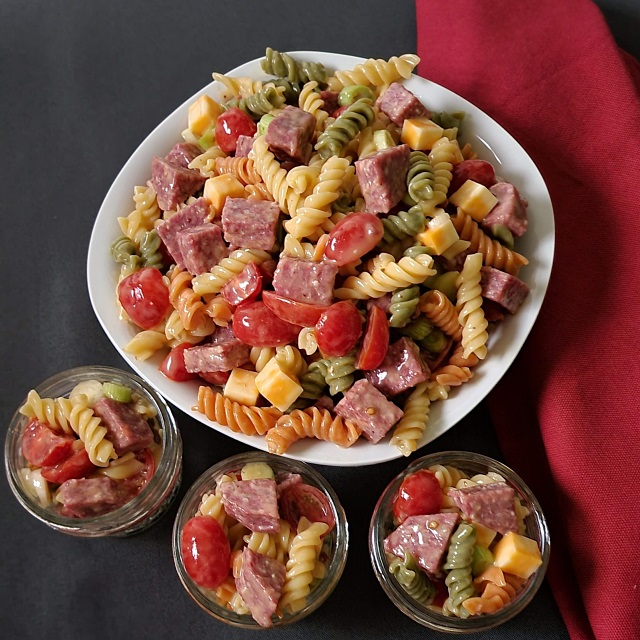 Have you tried this Honey Mustard Pasta Salad recipe yet? It’s simple to make and delicious to eat. The tang of the dressing compliments the seasonings of the summer sausage quite nicely. A tasty side dish for sure. I can’t wait to hear your feedback when you give it a try.

Sausage “flowers,” maybe this idea is something you will want to try. Our Hukki summer sausage was the inspiration for this appetizer. The “bubble” edges of the thinly sliced sausage rolled up and fit into a large jalapeno pepper give any party tray and additional focal point. Fun to make, tasty to eat. 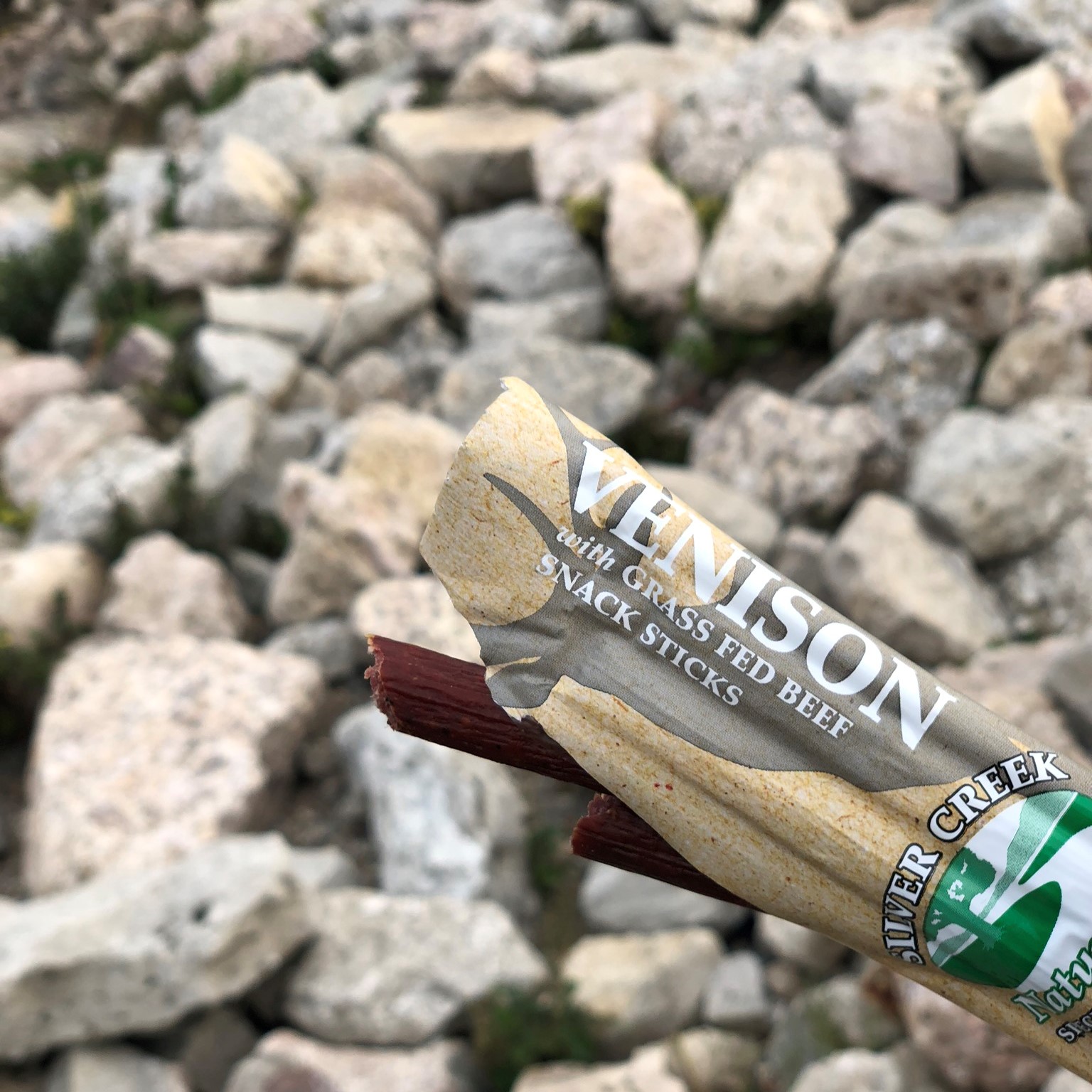 Will you be hiking in the woods? Don’t forget the snacks. Silver Creek Naturally meat snacks are single serving sized just perfect for a backpack, pocket, or purse. These snacks are available in beef, venison, turkey or jalapeno beef. Turkey or grass-fed treats packed with protein. 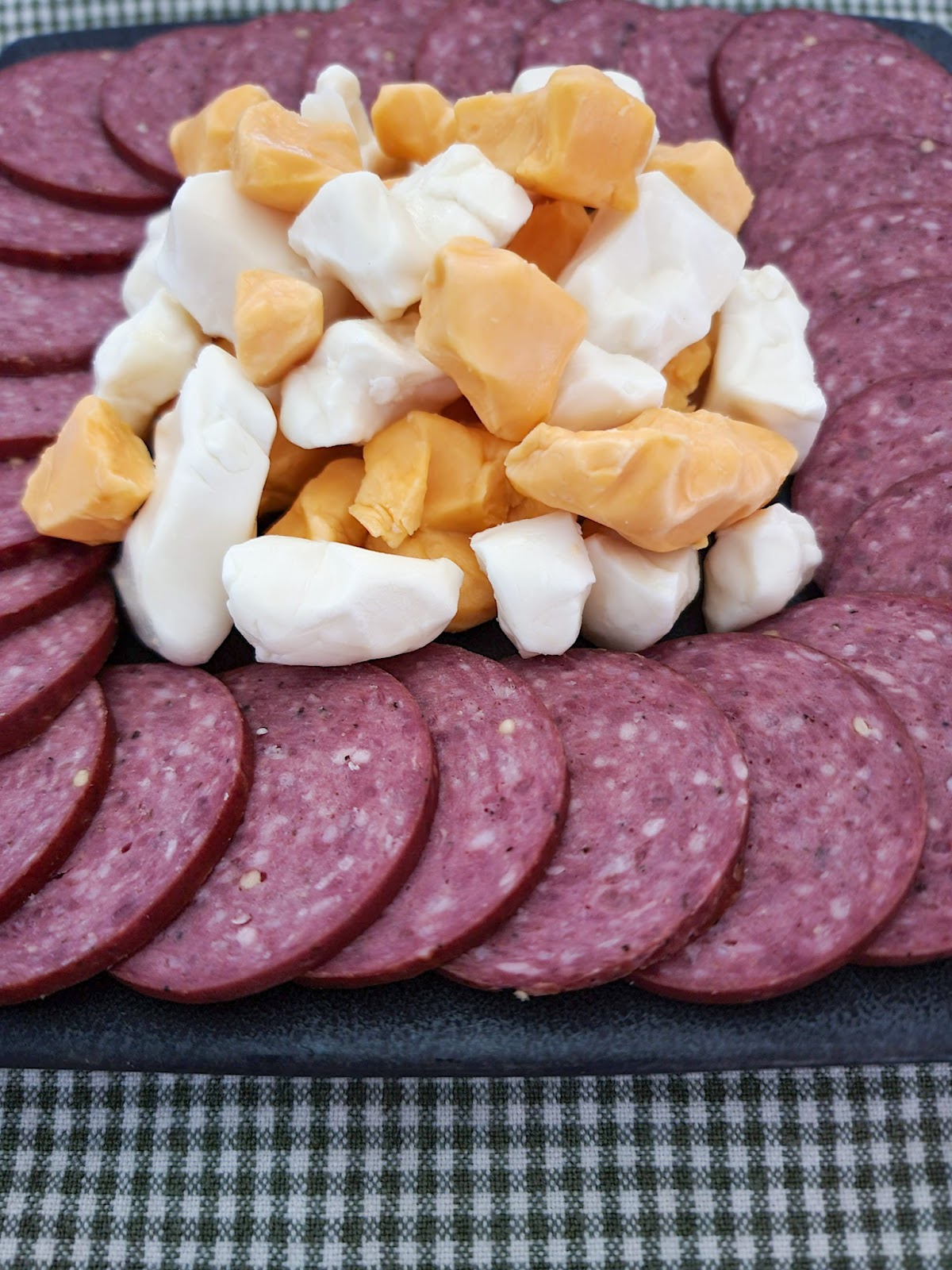 Now if you are like me and plan to put your feet up to just plain relax, a plate of summer sausage and cheese curds are just the ticket. Full disclosure - I’ll also have some knitting in my hands and a glass of wine on the table to round out the experience. It’s all about balance right? Cheese, sausage, and the fruit of the vine - what could be better?

So before you pack up and move out, take a moment to check out the great summer sausage and meat snack options on our website. You shop, we ship, and everyone is happy. Well, the time has come for me to move on with my day. The water has picked up speed now. Someone is working hard with a chainsaw and weed whacker grooming the park. People are out walking dogs and enjoying the beauty of another day. Thanks so much for spending time with me today. May you have a safe and festive 4th of July holiday. Until next time…